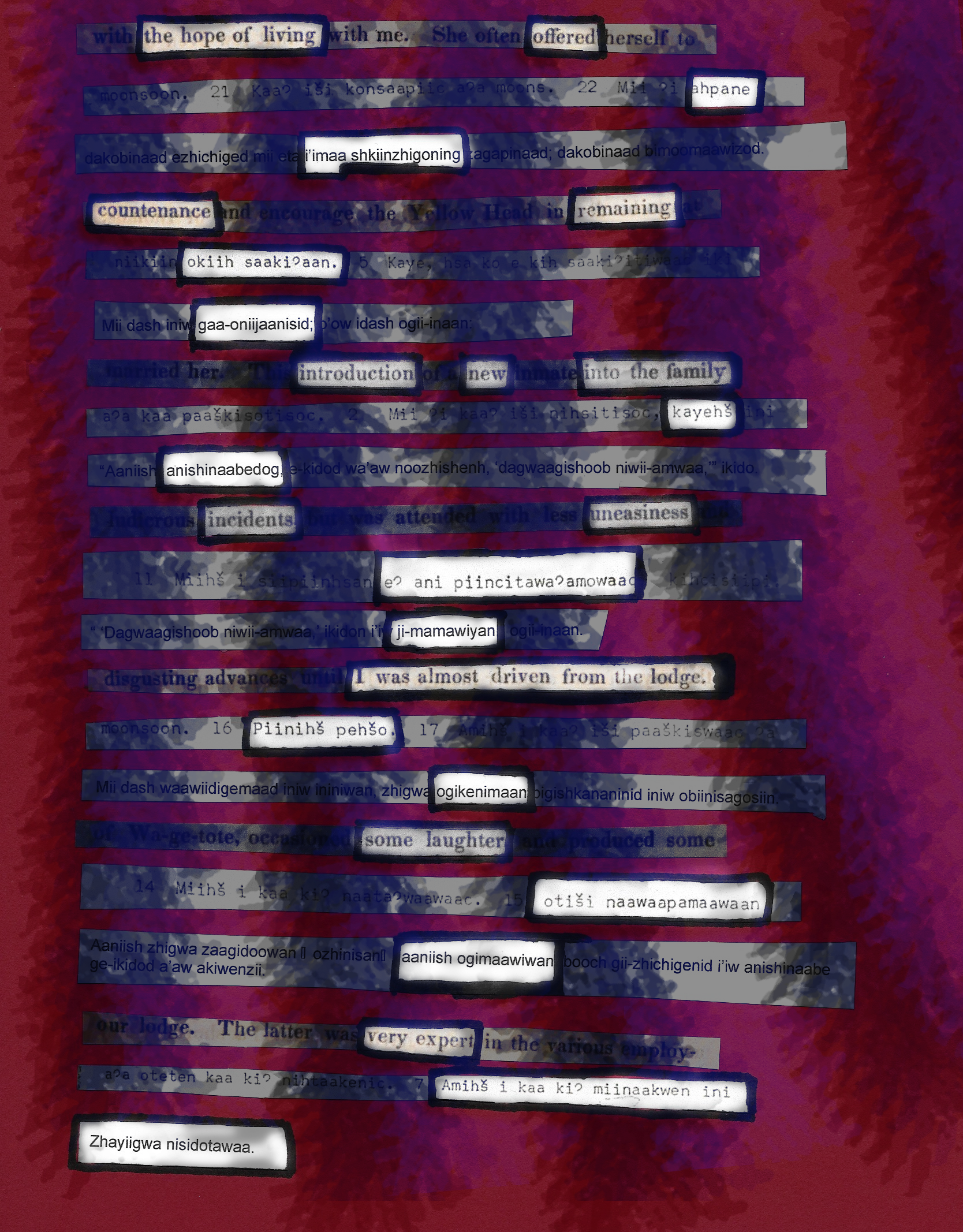 very expert
and must have given it to him
Now recognized.

Contains excerpts from:
Waasagonashkaang. “Nanabushu Pretends to be a Woman.” Ojibwa Texts, originally recorded by William Jones. Transliterated by Alexandra Crowder. Series I, No. 17, 139-145.

A transliteration of a story collected from Waasagoneshkaang, an Anishinaabe man on the Bois Forte reservation by anthropologist William Jones in the early 1900s. It recounts a traditional story about the Anishinaabe culture hero/trickster transforming into a woman in order to marry a warrior.

“He Killed a Moose and Killed Himself.” Document in the possession of the author.

A scanned transcribed document of a story told in Severn Anishinaabemowin, with no listed author or publication information. Acquired from a student in the University of Toronto Anishinaabemowin program, where it was used as an instructional tool. The story describes, among other things, two men from the speaker’s community who lived together as a married couple.

Tanner, John, and Edwin James. A Narrative of the Captivity and Adventures of John Tanner,(US Interpreter at the Saut de Ste. Marie,): During Thirty Years Residence Among the Indians in the Interior of North America. London: Baldwin & Cradock, 1830.

An as-told-to autobiography of John Tanner, a white American captured and adopted by an Anishinaabe family in the late 1700s. The portion excerpted describes Tanner’s encounter with a Two-Spirit/trans woman, Ozaawindib, who sought to marry him.

“This poem draws on three documents that reference Indigenous Anishinaabe queer, trans, and Two-Spirit individuals. Two documents are in the Anishinaabemowin language (with different spelling systems) and one in English. Each is from a different time: one takes place in mythic time, one is about a long-ago community member that the speaker remembers, and one is from the writer’s own experiences. Some of this material is affirming, some is degrading. I have interspliced the words in both languages to suggest another story, perhaps the story of Two-Spirit Anishinaabe people at large, a story of love, rejection, and renewed recognition.”

Kai Minosh Pyle is a Two-Spirit Michif and Baawiting Nishnaabe writer, researcher, and language teacher originally from Green Bay, Wisconsin. Currently they are a postdoctoral fellow at the University of Illinois working on a book about Anishinaabe Two-Spirit history. Their first chapbook, AANAWI GO, was published monolingually in Anishinaabemowin in 2020. WEB