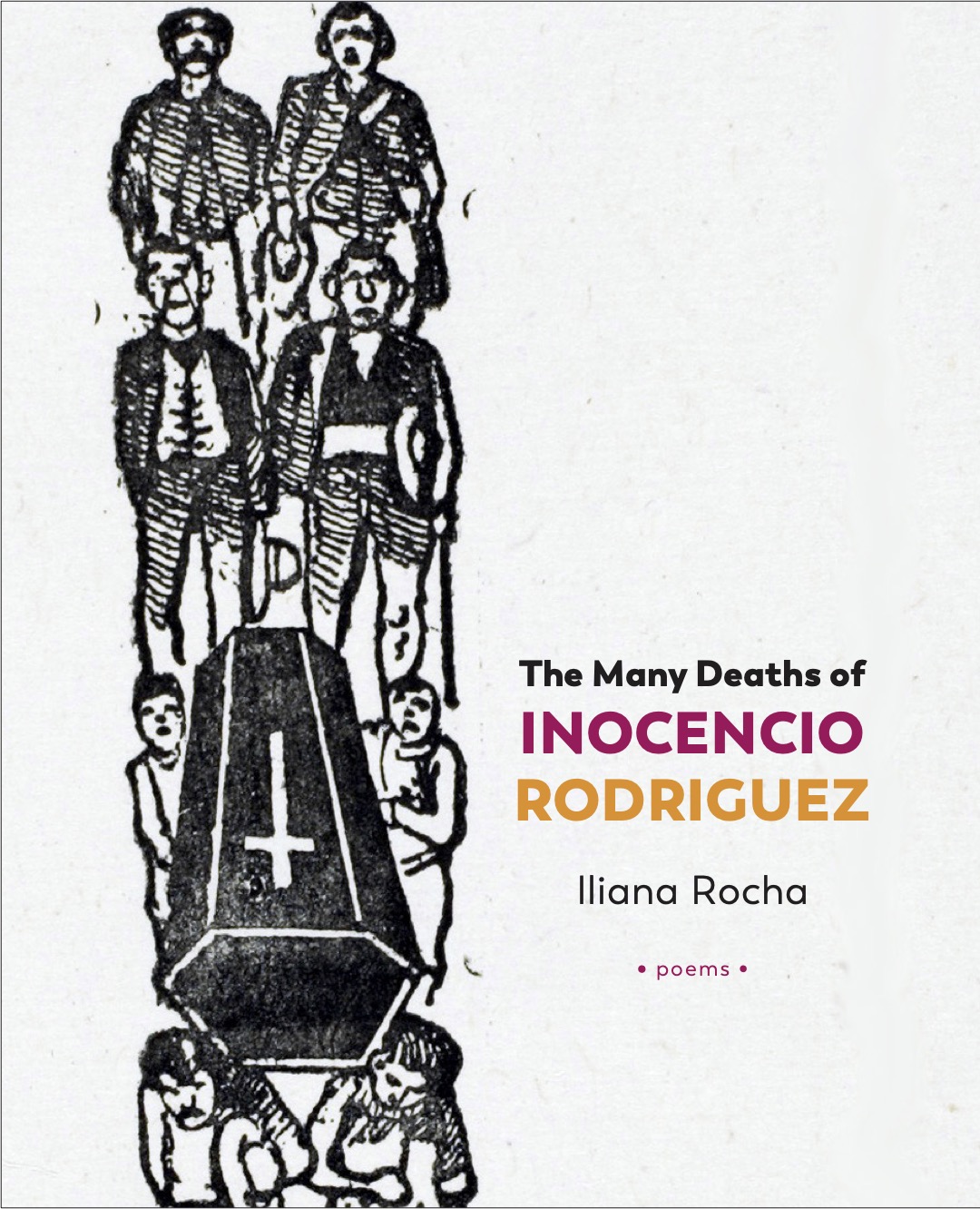 In Iliana Rocha’s second poetry collection, The Many Deaths of Inocencio Rodriguez, the theme of pop culture is carried through from her first collection, Karankawa. In this most recent collection, she depicts acts of violence against a background of baseball, Hollywood, and pop music. “Landscape with Graceland Crumbling in My Hands,” begins, “A man hits on a woman, as Elvis would, / as subtle as a pool cue to the chest, / as careless as gunplay.” Pop culture references are used both as a seemingly innocent foil and generators of violence, such as in “Ken Caminiti Dies in a Houston Hotel.”

In this poem, sex and violence are juxtaposed against a baseball game in Houston’s Astrodome. There in the Astrodome where he exposed his daughter to a passion for baseball, “my father stood & wept for the racism in Texas, just after the first pitch, after / the picking cotton, El Campo, Moczygembas (a Polish nickname/ for heavy drinker) that wouldn’t sell him pastry, for inevitable infidelity/ & alcoholism, how statistics quantifies things & he just can’t…” The speaker’s father both models and struggles with this dichotomy, that the only thing more American than baseball is a sex scandal and racism, even as he attempts to be both American and Mexican.

As the collection moves from violence against the disenfranchised and the oppressed toward violence against women, the pop culture theme morphs into an interrogation of America as the the ultimate villain behind these crimes. Pop culture models violence and turns dead women into pop culture references in such poems as “Tabloid for Black Dahlia,” seen in the line: “Here! Is Dahlia’s belongings / Letter to follow, [ ] our obsession [ ] blessed/ [by ] a knife’s dancing swarm, her body/ bisected, doing its due diligence to [ ] violence,/ to power, to sex: [ ] enshrined digitally–.”

This poem demonstrates another strong theme of the collection: erasure. At times, the bracketed emptiness represents reduction of the person to a stereotype, as in the second poem titled “The Many Deaths of Inocencio Rodriguez.” Other times, the bracketed blanks further demonstrate the erasure of humanity, reducing the victim to a headline, to a lifeless body, to spectacle, as seen in “Tabloid for the Black Dahlia.” Towards the end of the collection, the white space increasingly represents the women who have gone missing–disappeared supposedly without a trace.

In The Many Deaths of Inocencio Rodriguez, the American Dream her grandfather, grandmother, and father believed in is a 1950s domestic bliss that hides lurid violence in unshaped dough, scorpion infested sheets, and empty beer bottles. Rocha writes in another iteration of the title poem, “Happiness won’t find a home here, / escapes through each home’s latticework like papel / picado chiseled down into a pair of doves.” In this world of pretend, the people have as many iterations of self as the collection has title poems (26 to be exact), and each home contains an absence.

The Many Deaths of Inocencio Rodriguez by Iliana Rocha’s is published by Tupelo Press and is the 2019 winner of the Berkshire Prize for a First or Second Book of Poetry. This is her second book of poetry, following Karankawa published in 2015 (University of Pittsburgh Press).